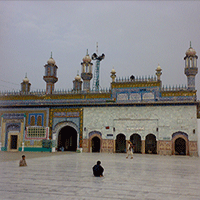 You have exhausted your free sher pages per month.

Shaikh Sultan Bahoo was born on Thursday, the 1st of Jamadi-us-Sani in 1039 H (17 January, 1630 A.D) at dawn, in the reign of Mughal Emperor Shah Jahan in Shorkot, District Jhang, Pakistan (then India). He belonged to the “Awan” tribe of the progeny of Hazrat Ali Bin Abu Talib. Awans are Hazrat Ali’s children from wives other than Hazrat Fatima. Sultan Bahoo’s father Bazayd Mohammad was a soldier by profession and a titleholder in Shah Jahan’s army. His mother, Bibi Rasti was a Saintly woman. She was spiritually informed of Sultan Bahoo’s grandeur and spiritual status before his birth and according to his status of Fana-Fi-Hoo (annihilation in Hoo) his name Bahoo (One with Hoo) was revealed to her. Sultan Bahoo says:

(Meaning: Bahoo’s mother named him Bahoo because Bahoo has always remained with Hoo.)

Hazrat Shaikh Sultan Bahoo was a Wali (Saint, Friend of Allah) by birth. He remained engrossed in heavenly experiences and doubtless spiritual triumphs from his early age. Sultan Bahoo gained his early mystic and spiritual education from his mother.

Hazrat Sakhi Sultan Bahoo could not avail the opportunity to receive formal worldly education because he was ever absorbed in the deep Ocean of Divine Unity, even then he has written 140 books. All of his books are in Persian except the collection of his poetry which is in the form of Punjabi quatrains. Sultan Bahoo’s books are masterpieces of The Divine Knowledge.

Sultan Bahoo has not used the conventional terms of Sufism or Mysticism for his teachings; rather he calls them ‘Faqr’. Faqr is the spiritual way which leads to The Divine Knowledge and Vision of Allah. In all his books he lays emphasis on acquiring the way of Faqr under the spiritual guidance of a Sarwari Qadri Murshid. He declares the Zikr and Tasawurof Ism-e-Allah Zaat the key to the ultimate sanctity and purgation of soul after which the soul is blessed with The Divine Vision and presence in The Holy Assembly of Prophet Mohammad, which are the most elevated spiritual stations.

Shaikh Sultan Bahoo says in his books that despite of all his efforts he could not find a truly capable Seeker of Allah to whom he could entrust The Divine Trust of Faqr for the future Guidance of Seekers, so on the 1st of Jamadi-us-Sani in 1102 H (1st March, 1691 A.D) he passed away without transferring this Trust to anyone. Afterwards, Hazrat Sakhi Sultan Bahoo entrusted It spiritually to Syed Mohammad Abdullah Shah Madni Jilani. The Shrine of Hazrat Sakhi Sultan Bahoo is in Jhang, Pakistan. His urs is held on the first Thursday of Jamadi-us-Sani.

Sultan Bahoo’s writing style is very simple and easy to understand even for a less educated person. His writings are so influential that they envelop the reader completely. If these books are read respectfully after ablution, an ocean of spiritual beneficence pours down to the reader. If a reader continues reading them with complete faith and true heart, he will be guided towards the Perfect Sarwari Qadri Murshid who is the real spiritual successor of Sultan Bahoo in the present age. Sultan Bahoo’s following books are below: