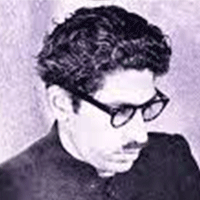 Aziz Ahmad Khan Aziz Warsi was born on July 17, 1934 in Muradabad district. After completing his primary education in a local school, he passed the examination of Adib-e-Kamil from Jamia Urdu Aligarh. At the same time, Oghat became a disciple of Shah Warsi and then Aziz Ahmad Khan changed his name to Aziz Warsi. While attending poetry recitals and recitations, Aziz Warsi began to realize that he could recite poetry himself. So, from a very young age he started reciting poetry, and was eventually hailed Qadir-ul-Kalam in poetry. Aziz Warsi was born into a modest farming family. His father, Chaudhry Nazir Ahmad Khan, was a clerk in the forest department. Aziz Warsi has also kept alive this tradition of Sufism which is found in poets like Khawaja Mir Dard Dehlavi, Shah Akbar Danapuri and Asghar Gondvi. The latter’s impact is manifest in his Aziz's poetry. Aziz Warsi died on July 29, 1989.