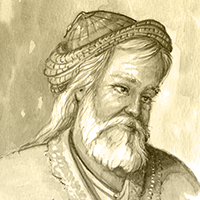 Sheikh Fakhruddin Ibrahim Iraqi was an seventh-century Sufi poet, mystic, and scholarly writer. Ibrahim was the son of Iraqi Abdul Ghaffar Kamijani. He was born in Hamdan on June 10, 1213. He had memorized the Qur'an at a very young age. After completing and studying the Qur'an, he went to Hamdan for further education. At the age of 17, he graduated from the Madrasa of Hamdan after studying Maqoolat wa Manqool and moved to Baghdad, as per custom. Iraqi was also a philosopher, and used to write poetry in Persian. His poetry was a huge hit in his time. Even today his poems can be heard in monasteries and shrines. He passed away in 1289.