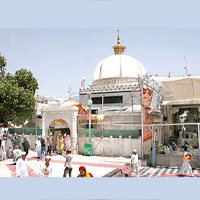 Khwaja Moinuddin Hassan Chishti is the paragon of Hindustani Spiritual thought. His father's lineage goes back to Imam Hussain, the youngest grandson of Hazrat Muhammad Pak. His father's name was Ghayasuddin Hassan. He was deeply attached to the Sanjar area of ​​Sistan. His father was a learned wealthy man of his time. His mother also belonged to the Sadat family. His lineage is also similar to that of Imam Hassan, the great-grandson of Hazrat Muhammad Pak. His mother's name was Umm-ul-Wara '. She was known as Bibi Mahnoor. Khwaja Moinuddin Chishti's family was religious. The influence of his father attracted him to religious activities from his childhood. In his time, Nishapur was considered a scholarly and literary center. He received his early education in Nishapur. Khwaja Moinuddin Chishti was just fourteen years old when his father passed away. After his father's death, he received a vineyard and a windmill from his father's estate. He started farming and started cultivating vineyards and made it his livelihood. Ibrahim Qandozi was one of the saints of that era. On his advice, Khwaja Moinuddin sold all his inheritance and went in search of education. During this period Samarqand and Bukhara used to be centers of learning. He went to Samarkand for higher studies. He entered a madrassa there and started teaching Qur'an. In the madrassa, he got knowledge of religion from eminent religious scholars like Maulana Ashrafuddin. Then he turned to Bukhara and knelt down in the service of Maulana Sheikh Hussam-ud-Din Bukhari. He also received the Dasthar Fazilat from Maulana Hussamuddin Bukhari and stayed in Bukhara for about five years. From there, he went to Haroon town near Nishapur. There Khwaja Usman appeared in the court of Harooni. Khwaja Usman Harooni was a great saint. He belonged to the Chishtia dynasty. Khwaja Usman Harooni, seeing his ability, talent, and enthusiasm, included him in his circle of pupils. Khwaja Moinuddin Chishti, after benefiting from the blessings of Khwaja Usman Harooni, returned to his homeland and then left for Baitullah and Rauza-e-At'har. There he heard his inner voice and decided to come to India. Traveling between India, he reached Lahore in the company of many dignitaries and saints. Here he visited the mausoleum of Hazrat Syed Ali bin Usman Hujweri, also known as Data Ganj Bakhsh, and with his devotees walked in front of the same mausoleum where he had walked. After completing the challah, they stayed there for a few days. After that, he left for Ajmer. By the time they reached Ajmer, people had witnessed many of his miracles on the way. Khwaja Moinuddin Chishti did not get married in his youth due to his involvement in Riyaz and worship. Later, he had two marriages on the insistence of his followers. One of his wives was Ummatullah. From her womb was born a daughter, Bibi Hafiza Jamaal. The other wife was Ismatullah. He had three sons, Khwaja Fakhruddin Abul Khair, Khwaja Hussamuddin Abu Saleh and Khawaja Ziauddin Abu Saeed. He died in Ajmer in 1235 AD at the age of 94 years. The works of Khwaja Moinuddin Chishti are as follows. Anis-ul-Arwah, Diwan-e-Moin, Ganj-ul-Asrar, Hadis-ul-Ma'arif, Risala-e-Wujudia, Risala-e-Aafaq-e-Nafs, Risala-e-Suf-e-Ilhamat.