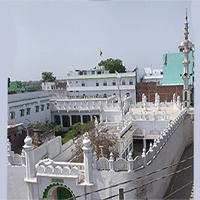 Arif Islampuri's real name was Amin-ud-Din Ahmed and his nom De plume was Arif. He was born in the town of Islampur in 1296 AH. He was the son of Shah Moinuddin Ahmad and the younger brother of Shah Akramuddin Ahmad Irfan Islampuri. All his life he stayed in Islampuri and also left his mortal coil there. Arif received his religious education from Maulana Hakeem Syed Muhammad Rafiq, a leading scholar, wiseman, and eminent Sufi saint of his time. Since he was very fond of memorizing the Qur'an, after the passage of his youth, he memorized the Qur'an with diligence and dedication. He was very polite and eloquent. He even had a penchant for mysticism. He was also a member of Darul Musnafin Azamgarh and a member of Anjuman-e-Tarqi Urdu-Hind. Arif had a matured taste for poetry and literature. He took corrections in his poems from his elder brother Irfan, he also sought amends in a few Ghazals from Hali Panipati. It is said that he became a disciple of Maulana Shah Abdul Qadir Islampuri and donated his library to Qadriyya Library of Qadriyya Monastery. Arif Islam died of a sudden cardiac arrest in the month of Muharram 1366 AH. His mausoleum is in found in Nayyar Islampuri in Qadriyah Monastery.