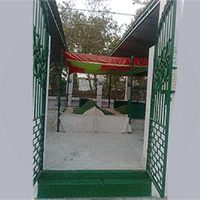 A distinguished Sufi poet associated with the Khanqah Rashidia, Jaunpur.

A distinguished Sufi poet associated with the Khanqah Rashidia, Jaunpur.

Asi Ghazipuri's family has been famous for their intellectual and spiritual contribution and primacy. His father Majid Sheikh Qanbar Hussain was a distinguished elder of his time. His paternal lineage goes back to Hazrat Umar Farooq. Born Abdul Aleem in 19 Sha'ban 1250 AH in Mouza Sikandarpur, Blia District, Asi was the only child of his parents. His upbringing and early educztion took place in Bihar. He studied Arabic and Persian with his grandfather Mufti Ehsan Ali. At the age of twelve he came to Sikandarpur and became a disciple of Shah Ghulam Moinuddin Rashidi. At first, he started teaching Aasi himself, but when a religious seminary was established in Jaunpur with the initiative of Sakhawat Ali Junpuri, Maulana Abdul Haleem Farangi was invited to teach in it, Asi became interested in studying with Maulana. As time would witness, Asi became a venerable elder of the Rashidia Monastery. Shah Ghulam Moinuddin Rashidi, the follower of Aasi, not only considered him as his child but also made him his successor and also granted him permission and caliphate. He was of a composed disposition, and initially used to write poems in the classical style, only to discover his own style later; taking up the pen-name Aasi. He was a pupil of Nasikh Lakhnavi. His poems had the purity of the emotions and passion of love, because he had himself to the true divine. Thus, the spark of Sufism in his Ghazals, too is evident. Apart from Sufism, Asi's ghazals also have the color of ghazal which was the hallmark of Mir Taqi Mir. Asi's lyrics are minimal and each of his poems are unique. He was a master-craftsman who took a number of disciples under his wing. Abdul Ahad Shamshad Lucknowi, Hakeem Farid-ud-Din Ahmed Farid, Hakeem Syed Mohammad Shad Ghazi Puri, Maulana Mohammad Ayman Sikandar Puri and Labib Sikandar Puri are his important students. Asi Ghazipuri spent his entire life in Ghazipur. This shining star of knowledge and grace, growth and guidance, poetry and literature passed away on 2nd Jamadi-ul-Awal 1335 AH and was buried in Mohalla Nooruddinpura, Ghazipur.