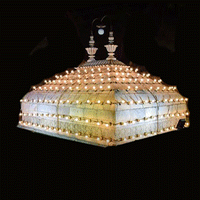 Born Abul Hasan Yameen-uddin, Amir Khusrau is considered to be the first poet of Urdu-Hindvi. The disciple of the famous Chishti saint Hazrat Nizamuddin Auliya, he was adept in Persian, Sanskrit, Urdu, Hindvi and many provincial languages of India. With an innate penchant for music, he is credited with the invention of musical instruments like the Tabla and Sitar. The art of Qawwali became a convention in Sufi gatherings in Khusrau’s time only. Some of his Khusrau’s Hindvi Geets have become a part of the folk. Besides poetry, he also composed Paheliyan, Kahmukarniyan, and Dhakosle, all of whom became extremely popular. Unable to bear the excruciating grief, he died in 6 months after the death of his Guru Hazrat Nizamuddin Auliya. "Full name Abul Hasan Yameen-uddin Amir Khusrau. Urdu - First Shair of Hindvi. The disciple of the famous Chishti saint Hazrat Nizamuddin Auliya. Persian, Sanskrit, Urdu, Hindvi and many Indian provincial languages were also empowered. Penetrating music and many ragas. And invented musical instruments such as tabla and sitar. Qawwali became common during his time and started trending in Sufi festivals. Wrote many Hindu songs which are still prevalent in the public mind. Along with Shairi, he has done puzzles, kahmukarniya, dhoksale. Also say those who became very popular. Due to not being able to bear the grief of the death of their guru, they died after 4 months. Major compositions - 1. Tuhfat-ul-Sigar 2. Wast-ul-Hayat 3. Matla-un-Anwar 4. Tughlaq-Nama 5. Khaliq Bari 6. Hasht-Bihisht 7. Afzal ul Fawid 8. Majnun-o-Laila