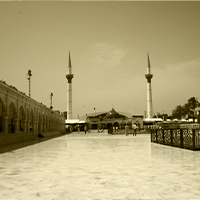 Great Pakistani Sufi and the author of Kashf-ul-Mahjoob.

Great Pakistani Sufi and the author of Kashf-ul-Mahjoob.

Born Ali in 1009 in Hujwer area of Ghazni to his father Usman, he wrote under the pen-name Ali, and later became immensely famous for his book Kashf-ul-Mahjoob. He got the title of ‘Data’ Ganj Bakhsh when once Khwaja Moinuddin Chishti came to Lahore, Ali continuously remained in his service and when he was leaving, he read this couplet: Ganj-Bakhsh-o-Faiz-e-Aalam Mazhar-e-Noor-e-Khuda Naqisa Raa Pir-e-Kamil Kamila'n raa Rah-Numa From that day onwards, he became known as Data Ganj Bakhsh. Sheikh Abul Qasim introduced him to esoteric sciences. Apart from him, he continued to benefit from the spiritual bounty of Sheikh Abu Saeed Abul Khair, Sheikh Abul Qasim Gargani and Sheikh Abul Qasim Qasiri. He traveled to Khurasan, Transoxiana, Moro, Azerbaijan and Lahore etc. He came to India on the orders of his mentor, who told him he would be made the Chief Sufi of Lahore, to which Data Sahib apologized by remarking that Hazrat Syed Hassan Zanjani Mashhadi was already gracing that position. But on his mentor’s insistence he left for Lahore. Researchers do not agree on how he got to Lahore. Some people think that he came to Lahore with the army of Sultan Mahmood Ghaznavi. While some people do not agree on this but they say that he came to India with Sheikh Ahmed Jamadi Surakhsi and Sheikh Abu Saeed Hujweri. The latter claim seems more credible and authentic. When he entered Lahore in the morning, he was informed of the death of Syed Hassan Zanjani Mashhadi. He read the funeral. Later, he made Lahore his permanent home and engaged in education, teaching and growth and guidance. He died in 1072 AH and his shrine is located in Lahore. All his life he was engaged in meditation, worshipping, and penitence. He also had a highly intellectual taste and wrote some noteworthy books such as Minhajuddin, Al-Bayan-ul-Ahl-ul-Ayan, Asra-ul-Kharq-ul-Mu'niyat, Kashf-ul-Asrar-ul-Ra'ita.