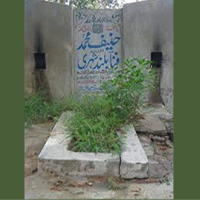 Popular poet of his time in India and Pakistan.

Popular poet of his time in India and Pakistan.

Born in Buland Shahar, Uttar Pradesh as Hanif Muhammad, he was was a student of Qamar Jalali, a well-known poet, and wrote under the pen-name Fana. Famous singer Nusrat Fateh Ali Khan set to tune Fana’s famous couplet ‘Mere Rashk-e-Qamar’, and the audiences first became acquainted with him in 1988. After that, his nephew Rahat Fateh Ali Khan sang it many times in music festivals, making it all the more popular. Fana had the honor of swearing allegiance to the elder of the Abul Alaiya dynasty, Faqir Naqibullah Shah. He has also recited Manqabat poems in honor of Naqibullah’s followers.