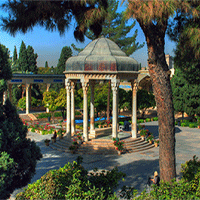 Most celebrated Persian poet well-known for his Faal-Nama.

Most celebrated Persian poet well-known for his Faal-Nama.

"O  Hafiz  of  Shiraz,  impart Foreknowledge  to  my  anxious  heart.”

Hafiz  left  no  complete  volume  of  his  works  ;  like  Shakespeare's, they  were  collected  after  his death.  There  are five  hundred  and  seventy-three  Ghazels  or  odes,  forty-two aphorisms,  seventy-nine  quatrains  and  several  Qasidas  and other  forms.  The  principal  themes  of  his  odes are  love, wine,  and  roses,  —  but  these  themes  all  have  a  secondary interpretation  and  a moral  significance.