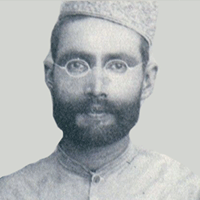 His real name was Muhammad Iftikhar Hussain and his pseudonym was Muztar. He was known as Etebar-ul-Mulk, Iqtdar Jang Bahadur etc. He was born in 1856 in Khairabad, India. Hussain was a student of Bismil and Ameer Minai. He was a poet in the court of the state of Tonk. A five-volume collection of his words has been published under the name "Khurman". Another prominent poet Ja'n Nisar Akhtar was his son. Muztar was born in a poetic atmosphere. He was educated by his mother who was the daughter of Allama Fazl-e-Haq Khairabadi and younger sister of Shams Ulama Abdul Haq Khairabadi. She was a great poet of Urdu, Persian and Arabic and a great scholar of jurisprudence and logic. He studied from his mother and became acquainted with the nuances of poetry. Maulana Abdul Haq Khairabadi used to say to his sister that if you were a boy, the name of To khirabad would be bright. At the age of ten, Muztar Khairabadi had started reciting poetry and took corrections from his mother. After the death of his mother, he sent a ghazal to Ameer Minai for correction. Ameer Minai returned the ghazal writing it needs no correction, he was perfect as a poet. As he moved to Rampur, Muztar Khairabadi offered his devotion to Haji Waris Ali Shah and during his stay in Gwalior, Muztar had a special attachment to Baba Sheikh Masihullah. Muztar also tried his hand at Hindi poetry and wrote Malhar, Thumri, Holi, Badra and Basant. About twenty days before his death, he left Indore for Gwalior. He was extremely ill, and his condition seemed incurable. He took his last breath on March 20, 1927 in Gwalior.