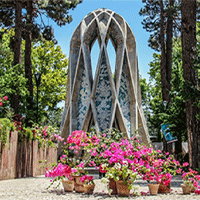 The master of quatrain, as popular in Europe as he is adored in Iran.

The master of quatrain, as popular in Europe as he is adored in Iran.

Famous all over the world for his book Rubaiyat. Along with being a well-known poet, he was a great mathematician. After his translation of Rubaiyat by FitzGerald, his name became popular in both East and West. After Maulana Rumi's Masnavi, Rubaiyat is counted among the most read books. It is said that at some time, newcomers coming to Sufi Khanqah were given to read Omar Khayyam's Rubaiyat and they were asked if they understood it or not. Upon their answer, it depended whether they would get admission in Khanqah or not. The Hindi translation of Rubaiyat in India has been done by the famous Hindi poet Shri Harivansh Rai Bachchan Saheb in the name of Khayyam's Madhushala. Inspired by his Rubaiyat, he later wrote the Madhushala which is a masterpiece of Hindi literature. Khayyam wished that his grave should be built in a place where the trees showered flowers twice a year. His wish was also fulfilled, as his dargah was built in Nishapur where the Sheftaloo and Pear trees are planted and they shower flowers twice a year.