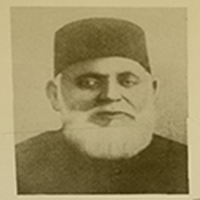 A poet of noteworthy fame from Khairabad.

A poet of noteworthy fame from Khairabad.

Riyaz Khairabadi was born in 1272 AH in 1855 in Khairabad district of Sitapur. His ancestor Syed Shuja Wali-e-Kerman came to this area nine hundred years ago. Riaz Khairabadi's father Syed Tufail Ahmed was a famous scholar. He had three sons: Syed Riyaz Ahmed, Syed Niaz Ahmed, and Syed Faiyaz Ahmed Raz. Riyaz started working at the age of ten with his father who was an employee. He started his career as a merchant. He learned Persian from his father. Due to his idealistic temperament, he was attracted to poetry from his childhood. Riyaz established a printing press in 1872 under the name of Malha-e-Rakhshan and issued "Riyaz Al-Akhbar". In addition, he issued a daily "telegraph" in his office, and a monthly "Gul Kadha-e-Riyaz" was published. Riyaz was a student of Munshi Tadbir-ud-Daula Aseer. Riyaz also spent part of his youth in Gorakhpur. His brother Syed Tufail was a police inspector there. Riyaz had four marriages. Two in the family and two outside the family. He also stayed in Lucknow for some time but did not take up residence anywhere except Khairabad. Riyaz passed away on July 30, 1936. They were bound by the law. Riyaz's family, free from sectarian prejudice, was a combination of Shiites and Sunnis. Riyaz's father was a staunch Sunni and his mother a Shiite. This had a profound effect on Riyaz. Riyaz had a great devotion to Hazrat Ali and also had a heartfelt attachment to Khwaja Moinuddin Chishti. Riyaz Khairabadi had a great devotion to Haji Waris Ali Shah and was inspired by this devotion and pledged allegiance to him.