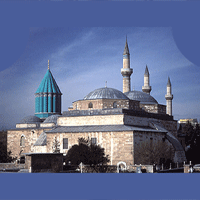 Rumi’s real name was Jalaluddin Rumi. His world famous Masnavi, also known as Qurani Pahalvi, spans over 26,600 verses. It is said that he met the famous Sufi saint Sheikh Fariduddin Attar in Nishapur, who presented him a copy of his Ilahinama. Rumi had two marriages which bore him two sons and a daughter. According to Winfield, Rumi is unrivaled in mysticism. Rumi considered Shams-e-Tabrez as his spiritual guide, and following his mysterious death, Rumi named his Diwan eponymous to his Guru’s. Rumi’s Masnavi is considered to be one of the most widely read books worldwide.