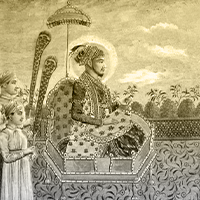 Hafiz Abdul Rehman Khan Ehsan Dehlavi's ancestors came to India through Bukhara and Herat during the reign of King Tughlaq. Ehsan Dehlavi's father Hafiz Ghulam Rasool Muhammad Shah and Ahmad Shah used to teach Holy Quran and theology to the children of the royal family. Ehsan's father married the daughter of Qamaruddin Khan's son Badruddin Khan. Ehsan Dehlavi, was born as Hafiz Abdul Rehman Khan in Delhi in 1182 AH. Ehsan Dehlavi saw the reign of three Mughal kings Shah Alam II, Shah Akbar II and Bahadur Shah Zafar. It is said that Shah Alam II was also a student of Ihsan. Ehsan's intellectual prowess was acknowledged by contemporaries to later generations. Mirza Izad Bakhsh, the middle son of Ehsan Shah Alam, held the post of Mukhtar in the government of Farkhunda Bakht. Ehsan was very keen on travelling. He also used to come and go to Lucknow and used to stay with Shah Alam II. Ehsan was not only a good poet but also a high-ranking religious scholar and a sincere man. There was cleanliness, sophistication and politeness in him. Ehsan had mastery in both Arabic and Persian. He learned the art of poetry as a skill and knowledge. He had a keen eye for experimentation and was hailed as a master of prosody. A prominent feature of his poetry is the simplicity and purity of language. A prominent feature of his poetry is the "rebellious nature". He was a court poet but he did not write "court poetry", pleasing the royals. He never wrote odes, but did satirize kings. In addition to the royal family, his students included many elders of the later generations. His completed works are included in ‘Kulliyat-e-Ehsan’.